skip to main | skip to sidebar

Powder co-editors, together with contributing poet Rachel Vigil, are interviewed in a podcast released today by the Wandering Scholars program at University of Maryland University College Asia. Joining us was UMUC military science professor Aleta Geib, who has included Powder on the syllabus for her Spring 2009 course on women in the military at UMUC's Guam campus.

Listen here.
Posted by Kore Press at 8:20 AM No comments:

New Century, New War, and New Role for Women in the Military 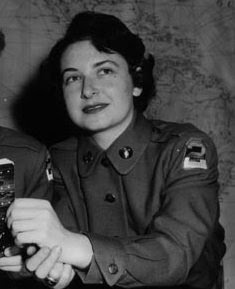 Anna Osinska Krawczuk is the author of the Powder poem "War Terrorism." She is the Immediate Past National Commander of Ukrainian American Veterans. She was born in Warsaw, Poland, to Ukrainian parents. Krawczuk joined the Women’s Army Corps in 1955 in Newark, New Jersey, at 18 years old, just after becoming an American citizen. Part of her job was to run the film projector for officer briefings, some of which detailed the aftermath of liberated concentration camps. She was honorably discharged at age 21 and now draws from her time in the army for her poetry.


The history of women in America’s military service was often marked by gender discrimination, something felt even now in the fully integrated “co-ed” US Armed Forces. During the Civil War both the Union and Confederate armies forbade the enlistment of women. Women soldiers had to assume masculine names, disguise themselves as men. Some were killed in action, others were wounded. If a woman in the ranks was discovered, she were quickly dismissed from the military. Discharge documents dated April 20, 1862 for “John Williams” indicate the reason for mustering out was “that he was found to be a woman.” The most documented cases of that era are about Sarah Edmonds, alias Franklin Thompson, and a woman who called herself Albert D J Cashier – they served as registered nurse, mail and dispatch carriers. Sarah even received a government pension in 1886. Despite recorded evidence to the contrary, the US Army tried to deny that women played a role in the Civil War. Today, women serving in the military are socially accepted, thanks in part to the vision and courage of their predecessors, the women combatants of 1861–1865.

Until 1970 the highest rank for servicewoman was that of Colonel. Today, servicewomen hold higher ranks, and on July 23, 2008, the U.S. Senate confirmed the promotion of Lt Gen Ann E. Dunwoody to four-star general. She is the first woman to serve in the United States military as commanding general, US Army Materiel Command at Fort Belvoir, Virginia. Presently, over 200,000 women serve on land, at sea, in the air, and on space missions – including our own - American Astronaut, US Navy Captain Heidemarie Stefanyshyn-Piper, crew member of the 27th Mission of Atlantis.

In 2006, US Air Force Thunderbird team included Major Nicole Malachowski of US Air Force, the first female demonstration pilot. Coast Guard Lt Holly Harrison was the first woman in the US Coast Guard to be awarded the Bronze Star while serving as commander of the Coast Guard Cutter Aquidneck in the waters near Iraq.

At this time, American women serving in Afghanistan, Iraq, and other countries are active participants in assigned missions and earn medals for courage. In Iraq, Sgt Leigh Ann Hester (of 617th Military Police Company) was the first woman soldier to receive the Silver Star since World War II. Spec. Monica Brown (82nd Airborne Division) received hers in Afghanistan. Chief Warrant Officer Lori Hill was awarded Distinguished Flying Cross for valiant flying under fire. And the list goes on and on.

We also have histories of Ukrainian-American servicewomen from World War II to Operation Iraqi Freedom. During WWII, Captain Tillie Kuzma Decyk served in US Army Nurses Corps and was awarded the European-African-Middle Eastern Campaign Medal, WW II medal, and a Bronze Star to EAME Theater Ribbon. UAV members Mary Smolley Scott (Post 19) and Dorothy Sudomir Budacki (Post 28) both served in the US Navy; Mary Capcara Holuszczak and Irene Zdan (Post 101) also served. Flight nurse Evelyn Kowalchuk served in US Army Air Corps and was honored by President George W. Bush on D-Day Memorial dedication in Bedford, VA in 2001. We also know of Lt Olga Konopsky Pryjmak, who served in Viet Nam as a nurse. A WWII orphan adopted by American family, she met her husband Steven Pryjmak (himself a Purple Heart recipient) in Viet Nam (former UAV Post 30). Oksana Xenos of Post 101 served during the post Viet Nam era and attained the rank of Lt Col US Army, retiring in 1995. Maria Matlak – Lt Col US Marine Corps, retired in 1999. She was the 57th woman on active duty to attain that rank in 1982. This is just a short list—we know of many other women who have served and there are many whose histories are unknown to us.

I appeal to every servicewoman and/or veteran to register so that your story can be known and told. Register with Women in Military Service for America.
Posted by Kore Press at 8:08 AM 1 comment:

Breaking into the Big Box 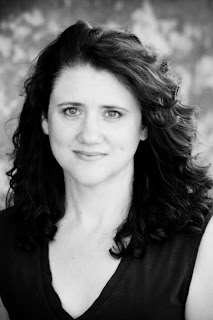 Shannon Cain is the co-editor of Powder.


As a nonprofit independent publisher, Kore Press believes fervently in supporting locally owned booksellers such as Antigone Books.
But ho, what's this? An invitation to sign books at Borders here in Tucson?
Last year, Powder co-editors joined literary activists Action Down There to promote an anti-consumerist, anti-war message. See photo of us carrying bags designed by Lisa Bowden, containing beribboned peace messages we handed out to unsuspecting shoppers. This in the very same mall we'll be visiting on Saturday for a booksigning. 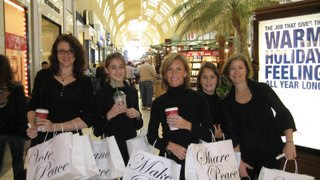 We are learning to live with the irony. I'm not going to kid you...when our local Borders called us on Veterans Day and asked to place an order, we hustled the books right down there without a moment's hesitation. Suddenly we could imagine Powder on mall shelves nationwide.

But oh, how disconcerting to be signing books in the belly of the beast. Least we can do is plug the Arizona Local First campaign, which kicks off tomorrow with Buy Local Day.
Posted by Kore Press at 10:03 PM 1 comment:

Images from the Powder launch in Tucson 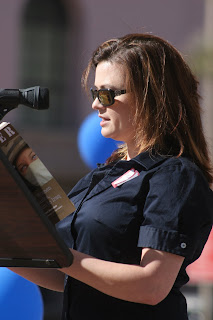 Christie Clothier reads from her essay "The Controller" 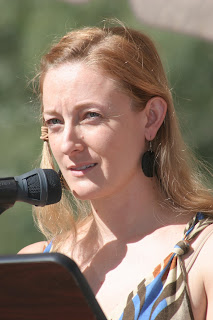 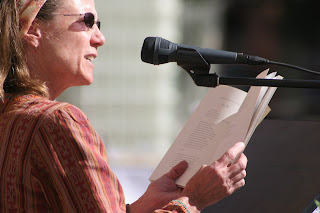 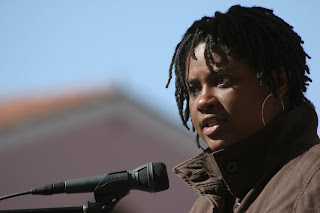 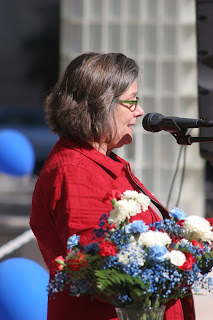 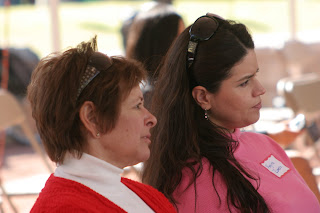 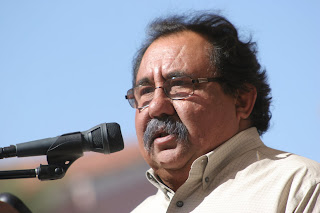 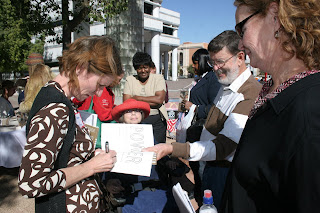 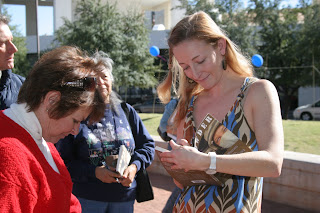 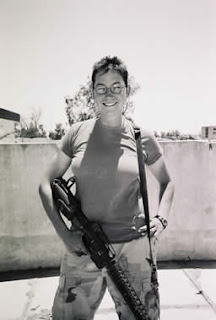 Sharon Allen is the author of the Powder essays "New Definition of Dirt," "Iraqi Entomology," "Lost in Translation" and "Combat Musician." Her writing has appeared in Operation Homecoming: Iraq, Afghanistan and the Home Front, in the Words of U.S. Troops and their Families. The following is excerpted from her nonfiction manuscript, 100 Things I Learned in Iraq.

The National Guard was a big shock to me. I just signed and shipped to Basic, having never been to a drill weekend. I knew nothing about the military. Didn’t even know how to stand at attention when I was sworn in.

I was the first one in my class to get into trouble, too. By smiling. I always got into trouble for smiling. I couldn’t help it, drill sergeants say some funny shit. When they got on the bus, it was like I was transported ringside for a WWF match. "Welcome to my world; welcome to Hell!"

The worst part of basic was the mental shit they’d do to you. Whenever one particular fuck-up fucked up, I was designated to be smoked for him. "Smoking" someone is when a drill sergeant comes up with a plethora of incredibly painful things for a soldier to do. A lot of them look easy, too. Try hugging a tree. Go ahead, try it. You have to wrap your arms and legs around the tree and keep from touching the ground. The angrier they were, the bigger the tree.

One time the drill sergeant found a letter I wrote my mom in which I referred to him by his last name, which we were not allowed to do. I also mentioned he was PMSing. At the next formation, he handed me an M60. Then he said, "Over your head." No problem. "Lap formation." Slight problem.

An M60’s pretty damn heavy. Especially over your head, lapping formation. I couldn’t actually run with it over my head, anyway. I’d put it on my shoulders and run, and then put it over my head and walk. Knowing that I hadn’t really done anything wrong (while other people had, and hadn’t been given anything to carry over their heads) and knowing that there really wasn’t much more they could do to me, I started pressing the M60. And smiling as I sung cadence at the top of my lungs.

So, the M60 was assigned as a personal battle-buddy. I had to sleep with it, shower with it, bring it everywhere. I named it "Sam" and cuddled up with it every night. Caused some bruises, but that’s OK.

They took it away from me four days later. They later told me I was getting too much respect from the other soldiers.

I wasn’t a total smartass. The only reason I got away with anything was that I busted my ass, and I always completed everything. I wasn’t a fuck-up, and they didn’t try to "break" me. They just pushed me to be my best. To this day, I don’t have to worry if my car breaks down seven miles from an exit. I know I can road march 15 miles, and with full battle rattle.

I learned a lot in basic training. The most important thing you learn is that you can do a hell of a lot more than you think you can.

And, of course, to "adapt and overcome." We had a handbook that was a part of our uniform, (an "inspectable item"), called a "smart book." Had to have it with us at all times. One time the DS told us to pull out our smart books and noticed that mine was a little thin.

"Private Allen, where are chapters one through four?”

"Drill Sergeant, I have chapters one through four memorized verbatim."

"Drill Sergeant, there was no toilet paper in the latrines."

"Drill Sergeant, I wiped my ass with chapters one through four."

Adapt and overcome.
Posted by Kore Press at 7:27 AM No comments: 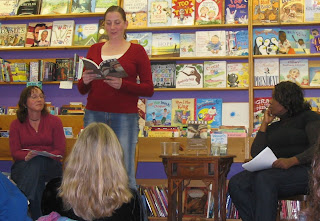 Powder Authors read on Veteran's Day 2008 at Women & Children First in Chicago. From left to right: Elaine Little Tuman ("Edit and Spin"), Sharon Allen ("Lost in Translation," "Iraqi Entomology" and others), and Dhana-Marie Branton ("American Music").
Posted by Kore Press at 8:18 AM No comments: 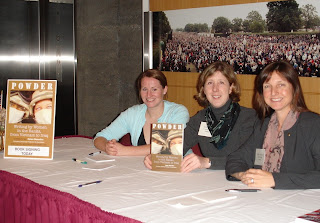 Above: Powder contributors (left to right) Cameron Beattie ("Leaping to Earth"), Judy Boyd ("The Joust") and Terry Hurley ("The Dead Iraqi Album") at the Women's Memorial at Arlington National Cemetery on Veteran's Day 2008 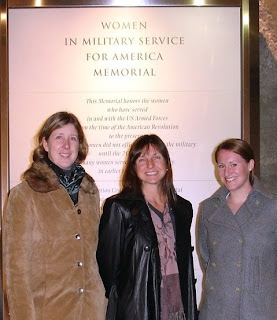 Posted by Kore Press at 9:15 AM No comments: 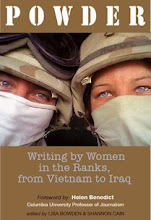 Powder in the Media

These are the stories from the boots that have been there, those who have walked the flight line, those who have locked and loaded a thirty-round magazine and lifted the bodies of the dead. It's crucial that we hear these voices.
-- Brian Turner (Here, Bullet)
A resonant collection of 19 new voices, POWDER thoughtfully renders a 360-degree view of war and the soldier's society, and what it means to be female inside them. Here is American military history as it hasn't been glimpsed before--through the eyes of creative women who serve."
-- Sarah Corbett, contributing writer, New York Times Magazine
Women tell different war stories than men. They tend to be less in thrall to the masculine posturing that so many military men feel compelled to perpetuate...as a result, there is little swagger in this collection, but a lot of soul searching.
--Helen Benedict, from the forward

More Powder in the Media